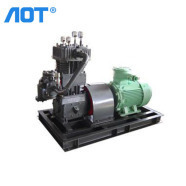 Butadiene compressor manufacturer tells you that butadiene is widely used in the chemical industry, and pharmaceutical intermediates, pesticide intermediates, rubber, dyes, etc. require a large amount of butadiene. In recent years, the production of butadiene co-produced by the ethylene cracker has dropped significantly due to the lightening of the raw materials of the ethylene cracker.
Dehydrogenation process technical measures. Butadiene compressor manufacturer tells you that the C4 fraction is the main raw material for the production of butadiene. Dehydrogenation of butane or butene to obtain butadiene is one of the most widely used process technologies. one. N-butane or n-butene are the two most commonly used raw materials for the production of butadiene. Under the catalytic action of a catalyst, n-butane or n-butene can undergo dehydrogenation to obtain butadiene.
Butadiene compressor manufacturer tells you that another way is to oxidize butadiene to get butadiene products. Air is used as the oxidant, and under the catalysis of the catalyst, the oxidation reaction is reversed, and the hydrogen atoms are removed to obtain butadiene. product. The mechanism of action of the oxidant is that oxygen reacts with hydrogen to generate water, and this dehydrogenation method has many applications and high yields.
The above information is the Butadiene compressor manufacturer's introduction of the application of the Butadiene, hope it helps you.